Hi everyone! Welcome to A Pyromancer's Say! While your here you can see some of my Wizard101 comics,read The Drake Wars fan-fiction, or just look at the randomness I write lol. Also I have a Contest going on right now, so look at one of the posts below to see it. I hope you enjoy this blog and have a nice day :).

Hello Everyone, Talon here, and first off I would like to thank everyone who entered in the contest a lot XD, I was kind of nervous in the beginning that no-one would join, but it proved otherwise XD, 7 people entered in the contest, and they produced 9 awesome entries. I loved them all, but unfortunately I can only pick one for each category :(. So how I am going to do the prizes is that the Header/Background winners can choose a prize up to 3000 crowns, while the name winner wins a prize up to 1500 crowns.  But just because you entered, all of the people who don't win, win 3 KI free game codes :D(I know, that sounds confusing lol).

Also as a honorable mention I would like to present Thatuviyapari's header. Unfortunately I could not enter it, as it did not feature anything Pirate101 related. It looks amazing, so I might use it some day eventually lol. 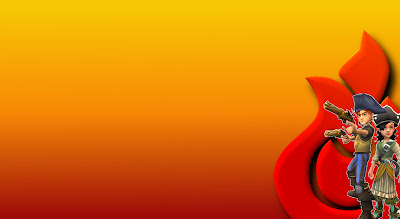 
Again I want to thank everyone who participated, and I want to tell all of the winners that I will be sending a TFC to friend with to claim your prizes. To all who entered, I will send your KI free game codes over email.

Thanks again, and Happy Magiking! I will be applying the changes soon :)

Last day for the Contest!

Just a Reminder that today is the last day for the contest ;) Here is the link to the contest post if you haven't seen it, Easy way to get crown items! Good Luck to everyone, and don't forget to have fun!

Random thought 1, when will Gifting become available in P101?

Hello everyone, Talon here with a Random thought.  When will P101 gifting become available, because it is lacking now lol. Your thoughts

Email ThisBlogThis!Share to TwitterShare to FacebookShare to Pinterest
Labels: miscellaneous

THE EPIC ADVENTURES OF OWEN MOONE! 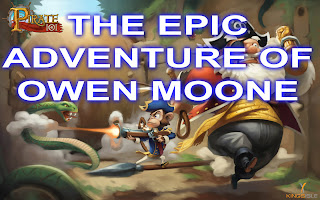 Hello everyone :) welcome to the start of my Pirate101 lets play, which will be in video form, to make it easier to understand XD, anyway, my new character will be a buccaneer named Owen Moone. I plan to make this a full lets play, so you will be seeing Owen for sometime ;). When I want to show off new features and stuff, I will use Talon, since he is a higher level, but eventually I might surpass him lol. This is the first video in the series, so I am just creating the character. Anyway, here is the video :D

Posted by TALON NIGHTSHADE at 9:00 AM 0 comments

Hello Everyone! Talon Nightshade/Moone here, with a Contest for you to use your editing skills to win an awesome prize! All you have to do is make a new name for this blog, make a header for this blog, or a new background for it. All Information is below! 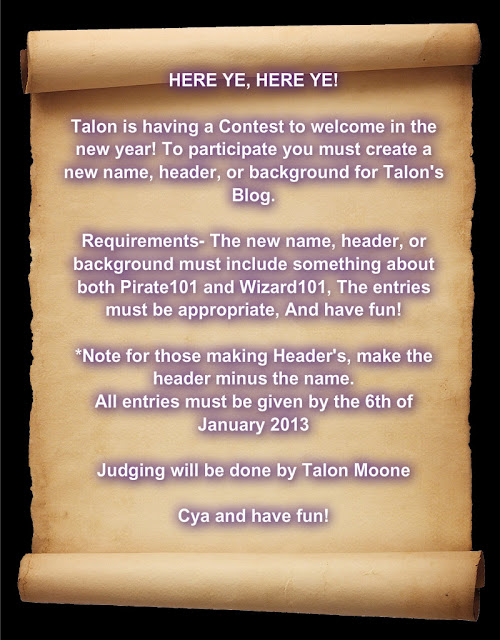 Well anyway, don't forget to have fun! Submit all entries to my email address, sghsri@yahoo.com

If you have any questions, please ask it in the comment's section below :)
Check back here tomorrow for another post,

Posted by TALON NIGHTSHADE at 9:00 AM 2 comments

Email ThisBlogThis!Share to TwitterShare to FacebookShare to Pinterest
Labels: Contests

Hey guys, Talon here, firstly, I want to wish you a Happy New Year :D, let this year be more awesome than the last. Anyway, for the second day of this week of posting I bring to you my list of top 6 features in Pirate101. Keep in mind this is my opinion ;). Feel free to put your top 6 features in the comments section below. Anyway, the features are not really in any real order, I like them all XD, these are just features that I think are very nicely represented. So lets get started! 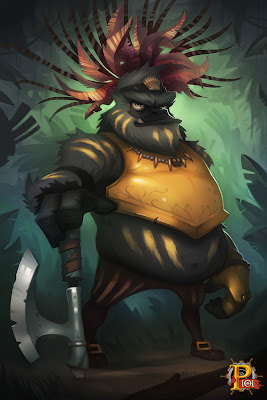 1. The music and art- The music and art are just stunning! The Music really gives you a feel of adventure and danger, triumph and darkness, ect, and the art looks amazing, I love how the sand and the clouds look in this game. I want to thank Dave Greco(art) and Nelson Everhart for the amount of work they put into they're work. I don't think there is a Soundtrack for Wizard101 or Pirate101, but if there is one, I would buy it :D.

Gortez in all of his glory ;)

2. The Story line- WOW! The story line of Pirate101 is just amazing. It was really thought out, and something that may seem careless, comes back into the story later, but this time it is of vital importance.I am not going to tell the story line, here as not to spoil it for anyone, but just no that is awesome. I think I will begin a Lets-play series on my YouTube account. The Storyline is very deep, and refers back to lore and previous quests many,many times, yet is not boring and a chore to play like some quests were in Wizard101  Anyway, I love how even though Pirate101 can get tedious sometimes, but always the quests and the rewards are worth it. I do agree that Kingsisle could increase the rewards for some quests, but it is still okay if they don't. I was disappointed by one thing, the story for Valencia, the heart of the Armada, was SO SMALL! I finished it in like one day XD. I really want to see it expanded in the future. Come to think of it, Monquista could use another skyway lol. I also want to talk about the Puppet Shows, but that will be number 3.


3. The Puppet shows were an amazing idea, if you ever forget the lore, or what you are looking for ect, just refer back to them. Of course they don't really connect in a story fashion, but that really doesn't matter. I think we can all agree that there should be more of them available to collect :). Anyway, here are my favorite puppet shows, all credit goes to Deathshard.

You have got to love Gortez lol 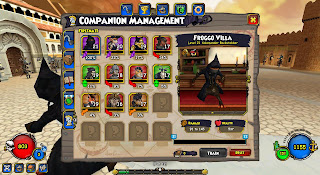 4. I really like how Companions are. They aren't puppets that fight for you like pets were for you in Wizard101, almost like an item of clothing. Companions in Pirate101 are an important part of the storyline, as they speak to you during quests and have their own dialogue for everything. It really lets you "bond" with them, you cringe as Bonnie Anne gets knocked out, and smile when Sarah Steele criticals. I like their leveling up system, though it can be improved. I think that including the "Companion training points" they should get experience when winning a battle like you do, as that would be more realistic. Also I think it would be cool when you are flying on your ship in the skyways they walk on the deck of your ship, though this would probably only be practical for any ship other than the raft, where you should have only like 2 companions on deck with you, who stay in place. Speaking of flying through the skyways, lets get to the next feature.

5. I think flying through the skyways and stormgates of the Spiral is one of the best part of the game. I love
flying through the worlds, just looking at the beauty of the landscape. And with the special music for each world's skyways, its just a great experience  How this could be made better is pretty hard, as they made it pretty awesome already XD. But I came with 2 improvements that, I think, would add a lot to the game. One is accounting for the dangers of sea(or skyway) travel, there could be rouge winds that could make it harder to control your ship, random storms spawning that push your ship into a random direction ect. The second suggestion happens to deal with Broadside Combat. Now, I think it would be awesome if you could control the ships cannons like in Pirates of the Caribbean, or even Assassin's Creed III, you would have to point the cannons in the direction of the ship and press fire, but at the same time letting yourself become vulnerable. Also, other Pirates who are on board could help you with manning the cannons. But just my opinion ;) 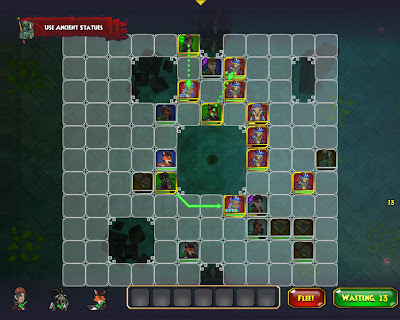 6. Another great part of the game is the Combat system, which is a good change from the Dueling of Wizard101. I really like the Battleboard system, it introduces more strategy in gameplay. I also like that sometimes boss battles aren't just "Kill-everything-else-in-the-room" activities anymore, they have sub-objectives, like interacting with objects, solving minor puzzles ect. I think that makes the fights more entertaining, more like actual Boss fights would be in Real life.

Well that is my Top 6 list :). I am really enjoying Pirate101, and think that this is one of my favorite games of time. Anyway, see you tomorrow, and remember to check back here everyday of this week to see a new post. Thanks :)


Posted by TALON NIGHTSHADE at 9:00 AM 0 comments

Hello everyone, Talon Nightshade here, and I am officially back :D. I took a long break due to school and stuff, but I think I can return to the community again. I don't think I post a lot of Wizard101 stuff, as my subscription for it has expired, but I will be able to post a lot of Pirate101 content :). 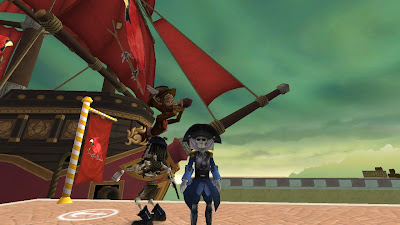 Me disguised as a clockwork, albeit a short one ;)

I might change the name of this blog, but the old background absolutely must go lol. Also, I have an interesting blog-post planned for every day of this week, so stay tuned :). Anyhow, I hope you guys are all doing good, and please, don't drink and drive tonight ;).

I got the map of Marco Pollo ;D

Title says it all will leave you with a picture :D 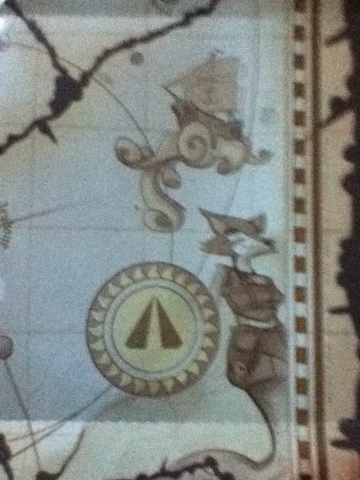 Hey guys, I have been taking a break from blogging for over a month or 2, mainly because of school lol. So I am back, and have great news! Happy Magiking!